The KAWABEGAWA DAM
The most controversial dam issue in Japan 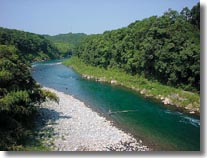 Project Description
The Kawabegawa dam project was officially planned in 1966. The dam is situated in Kuma county, Kumamoto prefecture which is in the southwest of Japan. At the beginning, an opposition movement had broken out at Itsuki village, where will be submerged by the dam, however, it accepted the plan under governmental pressure. The Villagers started to move to a neighborhood or a substituted new village. However, the completion of the project is far behind the construction schedule the government promised in return for the village's agreement with the project.

The government provided only information about the project's supposed benefits, but not about the damage to the environment and the ecology system. As the dam issue became large, people got to know the negative aspects of the project: the damage to creatures to creatures and failure of benefit. Farmers' and fishermen's voice of anti-dam also encouraged the campaign against the project.
Because of a refuse of compensation by fishermen and some land owners on the project site, the government started a procedure to compulsory purchase of the land ownership and the fisheries rights, which is called "Kyosei Shuyo" in Japanese, in 2002.

Because of the lack of providing genuine information of their charges and the government's wrong expectation of agriculture, farmers who demanded the revocation of the irrigation project using water from the dam appealed against the government in 1998 and won the suit completely in 2003. As a result, some changes to the project plan are needed, and the government suspended the procedure of compulsory purchase from October, 2003 until the time of completion of new irrigation plan in 2004.

70 % of the project has completed already, but the construction of the dam gate has not started yet. Most of the submergence villagers in Itsuki village have finished to move out. Only two families live in the center of the site against the project.

Main concerns of the project:
1) The failure of aims of project
-flood control: possibility of flood by the construction of dam; need of afforestation for flood control; existence of an alternative plan by citizens
-Irrigation: "No need for the water from dam."
More than half of the farmers who are supposed to benefit opposed to the project and filed a suit for its illegality against the government in 1998. Farmers won the suit perfectly in May, 2003.
-Hydroelectric power generation: too little amount of electric power

2)Negative impact to fishery
3)Destruction of rich natural environment
4)Lack of participation of the residents and disclosure of information
5)Unnecessary submergence, destruction of livelihood in the traditional village
6)Indebtedness in the future

Remarkable aspects:
■Building of a wide networking and cooperation among people supposed to be affected:
local inhabitants, farmers, fishermen, NGOs, groups from other areas suffering from the same problems, specialists, including those who are supposed to be beneficiaries.

■A number of fishermen stand against the project worrying about a deterioration of quality and a decrease of a catch of Ayu. The Cooperative Association of Kuma River Fishermen of 2000 membership continues to refuse the compensation in exchange for extinction and damages of eternal fishery in the river Kawabegawa, with the objection by more than half of the members.

■Anti-Kawabegawa dam movement is getting to be known as a symbol of the useless public works and waste of budget or taxes.

■Use of internet as a tool of campaign and an independent media -An NGO holds a mailing list. More than 600 members throughout Japan join the mailing list and exchange information and discuss the strategy.

■role of local government - Kumamoto prefecture, the local government, used to promote the project and urge submergence people in Itsuki village to agree to the project after the plan released by the central government, but it is changing its view for the project quite recently.The prefecture is taking a new role of an adjustment between local residents and the central government by holding a residents discussion meeting (open forum) as a place to fulfill accountability of the prefecture as well as participating in a decision work of the new irrigation plan positively. Also the local government decided to decommition ARASE dam located in the lower stream of the river Kawabegawa, because of strong voices of fishermen at the dam site.This is the first case of decommition of dam in Japan.